To Crusade or not to Crusade. 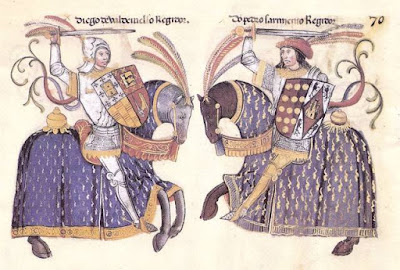 To crusade or not to crusade... That! Is the question of the day. Pope Urban II on this day 920 years ago at the Council of Claremont called for a Crusade. As events stand in the world, we are on the edge of a similar chasm today.

As a rule, I don't generally write something on the Facebook page and then post it here. usually it is the other way around. However I felt it is time at least on this blog to ask a question. It comes at the end of my my latest Modern Medievalist-Facebook Editorial Comment:

EDITORIAL COMMENT- It has been awhile since I opined on a subject. As a rule it is usually something about fighting rules or historical model vs. real world experience. I have however tried my very best to keep the worst of the modern day world from our pages. But recent events compel me to ask a question at the end of this essay.

Medievalists by their very nature tend to be conservative in their outlook on modernity. Most I believe look at the modern world ( At least in the privacy of their own mind.) askance at a lot of social changes that have swept the world in the past couple of decades or so. Which is why I think Medievalists are increasing in numbers. Meaning the more things change, the less sure the ground feels beneath their feet and they can be gripped with an intense need or desire to be anchored in their past. No one likes to feel they are adrift in the world.

Which leads us to the next interesting phenomena. Nationalism the has once more become a growing strident voice in the world. Especially if you have country where you live in, which has a long and involved history with the rest of the world.

I believe the underlying cause of modern nationalism has been the economic forces which have so completely rearranged modern society, both in the United States and abroad. Almost a full decade has existed where everything has been turned back to front and front to back.

We now have an entire generation who have little or no role models to choose from. Game consoles while fun, do not make a well rounded life or even remotely approaching what could be considered a normal life. And as a result the old symbols, which once raised armies of young men, off to defend their turf from the other turf warriors have come charging back once more into the forefront of our daily lives.

As a result, mass movements to realign old orders have broken out all over the world. South Ossetia, Libya, Egypt, Syria, Iraq and Afghanistan and the Ukraine, just to name a few.

We now have people who for the first time in their lives have seized a weapon. And with their weapons in hand, they now have a distinct and palpable form of real, not implied power at their fingertips. They hold the power of life or death over a growing multitude of others. Which as history has shown can be as addictive and more powerful than any drug yet invented. With the resulting and inevitable excesses following right behind them as a faithful dog.

The Sykes-Picot Agreement of 1916 has finally borne the hateful fruit that was planted almost one hundred years ago. With the creation of extreme Islam, and for the first time in a hundred years, the ethnic groups that were ignored or were suborned to allow for a tractable ruler to reign over a large space of the Arab world have been thrown down. Ultimately it doesn't matter the reasons behind the why. What matters now is the HOW. How do we react or deal with this.

Where do we go from here... Do we answer the clarion call of Pope Urban II's demand for Crusade... Do we react with fear and anger to terrorist attacks... I know these are very serious questions and not to be taken lightly. Words have as much power as actions do. They have gravitas, they mean something. History has tottered back and forth over the precipice of doom many times, and has only edged back by wisely chosen words or phrases.

I know the disaffected are angry. The unemployed or the underemployed are angry. It is EASY to say "They hurt us! Me smash them!" But the consequences are far reaching, and to paraphrase a movie line, "Can echo through eternity."

I ask these questions because the average person walking the street is not yet angry. Most cannot say, My uncle died in Paris or my mother died in 9/11. That kind of personal loss hasn't yet really reached the average person of the USA or the EU. I am concerned if it does, then a Crusade will be called. And more importantly it will be answered. And once a thing of this nature is put into motion, then it will only end after one side gives up, regardless of how many bodies lay in the streets.

So what path do we take~Do we choose the one of reactionism and lash back. Or do we take a course where we make the decisions and make them react to our actions.-Not the other way around. How measured should our response be... what will be the limit of our actions. Because I am too old, and too broken down by life to carry a weapon. So the young ones will be the banner carriers, like they are in all wars. They will be the ones to carry our burdens. Think carefully about the weight of actions taken we are asking our youth to shoulder for the rest of their lives.

sorry for the lack of images.
Google Chrome is once again unable
to load a simple image from


my computer.
Note MY COMPUTER not their damnable online program.
Posted by Unknown at 9:54 AM